Before going to see The Moth mainstage at the Byham Theater, my wife and I stopped into tako to grab some dinner. We’d eaten here previously, at the open kitchen seating outside, but tonight we were able to snag a seat at the bar. The bar manager was extremely warm and conversational, an incredible feat, especially while she continued to make complex drinks for the entire restaurant all throughout our meal. The food and drinks were excellent and we will absolutely return, despite the fact we’ve yet to eat here at a table. 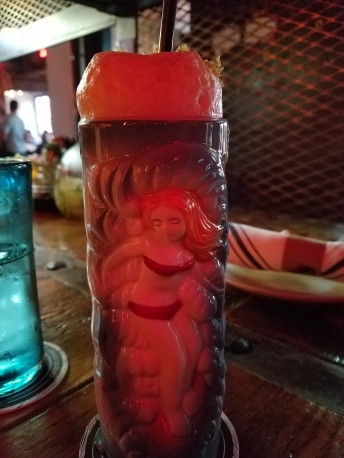 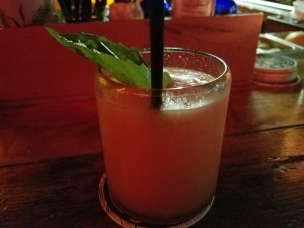 My wife decided on the Ramon’s Gin Fizz, being a big fan of gin and unique drinks. The fizz is extremely creamy and smooth, made with green tea infused Tanqueray, lemon, lime, rose water, with the addition of mandarin Jarritos at the end. All of the amazing creaminess comes from the addition of avocado and cream itself. It’s shaken until the entire drink becomes a tall foamy almost-milkshake, and expertly poured into the tall, ornate glass. The citrus finishes of mandarin orange, lemon, and lime balance out the thick creaminess and make a fascinating cocktail.

I went with the Lychee and Pepper margarita before our meal and with our appetizer. I love lychee, and the sweet, grapey, peachy fruit paired wonderfully with the spicy pepper, smoky Mezcal, crisp and sweet Bauchant (an orange liqueur). The pepper was a nice throaty spice and didn’t add too much of a burn at all, keeping the drink savory while still opening up the palate. I was torn between the two drinks, so after finishing the lychee pepper, I went with the Watermelon Basil frozen margarita during our meal. Perfectly smooth with natural watermelon flavoring, it was really a lovely drink, especially with the rich, fatty proteins in our tacos and the richness of the queso. Speaking of which…

The Queso Fundido was a magical skillet of cheesy meaty goodness. The simple, yet incredible dip from tako features their house-made chorizo, roasted shishito peppers, and an exorbitant amount of chihuahua cheese. We chose to enjoy the dip alone and with the warm flour tortillas served alongside. It was ridiculously rich, cheesy, and spicy delicious from that meaty, porky, garlicky chorizo and earthy, roasty from the peppers. The perfect kind of dip, wonderfully thick and gooey, it was an outstanding start to a equally impressive meal.

Each order of tacos comes with two, so we shared the Chorizo and Pork Belly tacos. The pork belly (on the left) were styled after a standard banh mi sandwich with rich, fatty braised pork belly, quick pickled vinegar cucumbers, lime, and a ton of crunchy herbs like cilantro, basil, and mint, sprinkled lightly with sesame seeds. The large portion of pork was present for every delicious bite (as a protein in a taco should) with the vegetables and herbs providing that wonderful crunch to counter the texture of the soft and rich pork. It was nice and sweet, with some of that acidic bite from the lime and cilantro.

On the right, making its appearance for the second time that night, were chorizo tacos. That same amazing chorizo from the queso, this time topped with roasted poblano peppers, a fried egg, sprinkled with cilantro and queso fresco, both a romesco and an arbol hot sauce, all over some caramelized onions. Of course just by looking at it you can tell it quickly turned into an outrageously messy taco. The small pieces of chorizo were awash in the romesco, chile arbol, egg yolk, and poblano peppers. It was definitely best eaten leaning over the plate and not recommended for first dates (unless you truly like to live dangerously and deliciously).

Each taco was replete with their fillings and featured portions. The appetizer and two tacos was a nice meal, especially when paired with the two cocktails I imbibed. Not a place to go to stuff your face (unless you’re looking to simultaneously empty your wallet), but hands down my favorite tacos downtown. Bakersfield and Bea’s Taco Town are both on my list to try down the road, so that ranking may change some time down the line. For now, there’s no better place to pull up a seat: either outside at their open kitchen or inside at their friendly bar, order a margarita (or 2) and get your hands messy. I’ve also heard rumors that you can make reservations and eat at a table like a civilized human being, but I’ve yet to take advantage of that, personally.