A couple of weekends ago, my wife and I were Downtown to see a show Saturday night at the Arcade Comedy Theater. We decided it’d be ideal to head to a restaurant and utilize their valet service rather than trying to negotiate the ballet that is parking, enjoying dinner, and seeing a show Downtown. We had previously enjoyed Emporio and found it quite competent in style/substance, so we decided to head up the steps to their “showcase of gourmet Italian fare” upstairs at Mezzo. While it certainly was Italian, I can guarantee that, I found many of the dishes, elements, and concepts to be muddled or under-executed.

For cocktails, my wife went with the Bella Ragazza (Sobieski, Brachetto, Lime, and Orange, the tall red glass on the left) and I went with the Words Once Spoken (Meletti, Lemon, Apricot Liqueur, and Maraschino). Sobieski (the Polish Vodka, not the 90s actress) was very strong in terms of an alcoholic kick and easily overpowered the light strawberry finishes of the Brachetto and citrus notes. It was strong and tart, but not much else. My drink, in addition to being far more dramatically titled, was a far better cocktail. The light aromatic Meletti Amaro blended with the tart sweetness of the apricot, maraschino, and lemon to form a very smooth and sweetly sour drink. Very similar to an Italian sour, I was impressed and would have ordered a second if I’d had the chance.

We decided to take advantage of their premiere offerings and went with the Cheese Board (when presented with the option between “local” and “Italian” we chose “Italian”) and the Castelvetrano Olives. Easily the best part of the charcuterie board, the Castelvetrano Olives were meaty, fresh, and had that perfect, almost-mushroom texture of the beautiful olives. The cheeses fared far less successfully. A combination of 2 identical aged cow’s milk (Reggiano Parmesan and Grana Padano), 2 identical soft sheep’s-milk (Robiola and Taleggio), and a forgettable and overly mild Mountain Gorgonzola. The spiced and sugared walnuts, as well as the prune jam added nice elements to an otherwise mild and bland cheese plate. I admittedly had my expectations set very high before even ordering, as Mezzo advertises themselves as a locale for Charcuterie, Italian Charcuterie specifically. Perhaps it was an off-night, maybe they’d run out of better options earlier in the night (we were there at 7:30 on a Saturday) or perhaps there was a mix-up in the kitchen. Whatever it was, I felt very let down by the lackluster offerings. 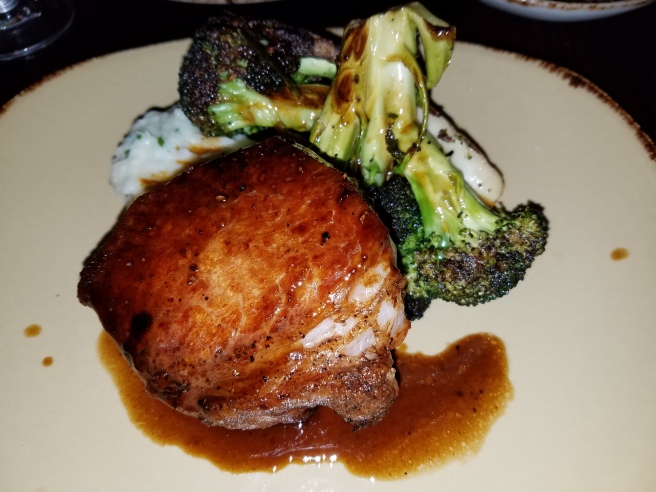 The hits kept coming with my entree, the Pork “Cut of the Day” (in this case the boneless loin), with horseradish whipped potatoes, roasted broccoli, and rosemary jus. We’d also ordered a side of Shishito Peppers as well as a side of the Charred Broccoli (served with Parmesan), but the waitress came over and asked if we’d rather substitute the Spaghetti Squash for the broccoli since I was already receiving broccoli with my pork. We opted for the substitution and the broccoli was delivered only on my plate, sans parmesan, which is desperately needed. The pork, especially for being the special cut of the day, was dry and overcooked. The chef recommended Medium and while I usually go for Medium Rare, I always trust in the chef’s recommended temperature when it comes to lamb/pork. The jus was necessary to provide some kind of flavor to a tough piece of pork. The plate found itself with a vegetable that had long since been forgotten in the oven to go beyond roasting and approach burnt, and a potato whipped beyond any hope of retaining any of the spicy bite of the horseradish or literal chew of the potato that comes from homemade whipped potatoes.

The two Contorni (side dishes) as mentioned above were the Shishito Peppers on the left and the Spaghetti Squash on the right. I had such fond memories of the Shishito Peppers from Las Vegas at Carnevino that I had to order them to see if that magic could be captured again. Gone were the smokey, soft, charred, roasty flavor of grilled peppers and instead they seemed to be tossed in just a little too much olive oil and topped with a little too much parmesan (there are vegetables under there, I swear!). The red onion and cherry tomatoes didn’t add much, especially after you roast them until they’re soft and limp. The spaghetti squash, shaved and served with a heavy hand of black pepper truffle honey, fared the best out of all of the dishes. Just slightly undercooked, the noodles of hashbrown-like squash were tossed with the thick sauce, creating almost a truffled alfredo of sorts. It was the pasta course I never asked for, but accepted wholeheartedly nonetheless. 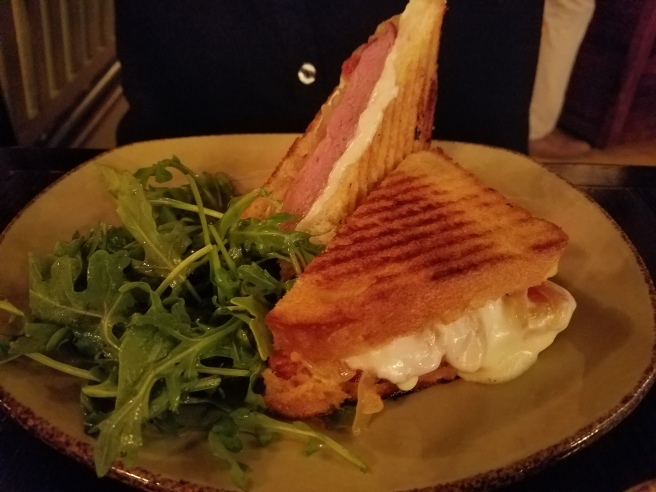 My wife, opting for something unique from the wildly uneven menu, went with the Homemade Sausage Panini. I don’t know what the goal was, or even what the vision was, but I have to assume it missed the mark. Accurately described as being served with mozzarella, there certainly was a lot of the heavy, gooey cheese. Also described as being served with a peppernota, but it instead seemed to have a handful of greasy onions and yellow peppers instead. Finally, in the strangest move of all, the “homemade sausage” was, hand-to-God, some kind of bologna. Tasting of garlic and not much else, the pink, meat loaf was cut in slices far more akin to a spam or caseless hot dog. To be 100% fair, bologna is a traditional Italian sausage, but I would have much rather it be advertised as a fried bologna sandwich instead.

All in all, we either severely ordered incorrectly or they missed their mark. I feel like a lot of the issues I had can be attributed to an attitude that comes along with being an established restaurant downtown. They know their clientele (happy hour crowds, bachelorette parties [we saw 4]), they can deliver at a price point with a wine/cocktail list large enough to keep them drinking long enough to serve mediocre food and come away looking like a far better restaurant than they are. Stick with the first floor and the meatballs. I don’t think I’ll be venturing up to Il Tetto (their rooftop beer garden), mostly out of a fear that the further I get from the street, the further I get from good food.