Far be it from me to put forth this expectation that I only go to good restaurants and have incredible meals, I have to share this recent experience with you all. Saturday night my wife and I were looking for somewhere to enjoy in the Monroeville area, a part of town notorious for their chain restaurants. We decided to try a place I’d grown up knowing about, but had never had the opportunity to experience. I’d remembered that they’d won some kind of an award from the Pittsburgh Restaurant Week a few years back, so that was all of the support I needed.

I should have known from the very beginning that we were in for disappointment. 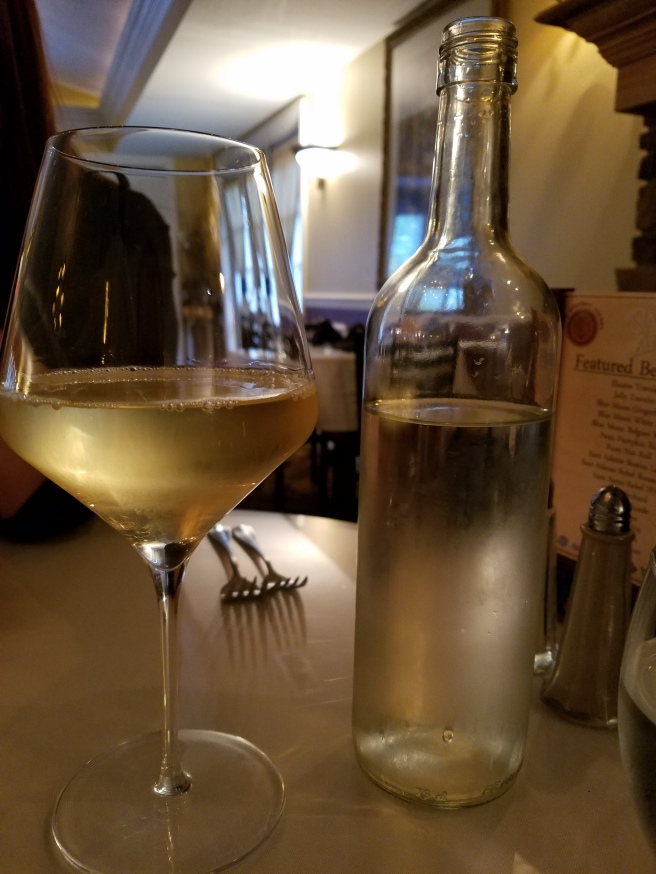 I ordered a glass of the Infinitus Moscato to go with my meal, which was quickly poured from a normal, appropriately-sized carafe into a glass that I can only assume was a novelty. Featured next to the repurposed wine bottle full of water, I assure you there are no camera tricks. I felt ridiculous drinking from it. Unfortunately the wine itself was far too heavy on notes of peach and had an intense bitter aftertaste, which I have to assume was from the wine not being freshly opened or properly stored.

Hearing the specials of the day from the waitress, we were extremely intrigued to try the the “mushroom and truffle risotto” appetizer. This is what was brought out. When we pressed her on why it wasn’t described as “fried risotto balls” she replied that the chef felt that if they were described as such, no one would order them. Red flags like this continued throughout the evening. The sauce was extremely watery and only served to moisten the already soggy with oil balls. The filling, full of the flavor of truffle and not much else, provided a nice cheesy off-set to the greasy coating and wet sauce. Search parties were sent out for pieces of mushroom or truffle and never returned.

When ordering our meals, the waitress asked my wife is she wanted soup or salad with her meal. Far more familiar with the prices matching up with the level of quality of the restaurant and all things being served a la carte, she declined. It was then that the waitress informed us that the salad or soup were complementary. My wife opted for the wedding soup and I opted for the Caesar salad. The soup, murky, and muddy, with strips of dark brown escarole, a handful of pastistio, and 4 tiny meatballs would have been better off left in the kitchen. The soup, mostly tasting of nothing, seemed to be an afterthought for a soup of the day. The salad didn’t fare much better. A warm(?) and over-dressed mixture of iceberg lettuce, soggy croutons, and shredded parmesan cheese, this was far from the traditional Caesar salad I’d expected. The waitress also asked me if I like anchovies (which I do) and served me these (which I don’t). Describable only as vinegar pickled halved anchovies, these were as close to the oil-packed anchovy filets I’ve come to expect on Caesar salad as ground-beef in the tacos from Taco Bell are from a bone-in ribeye. The fish flavor was closer to bottom of the ocean than the creamy, smooth flavor of a good anchovy. 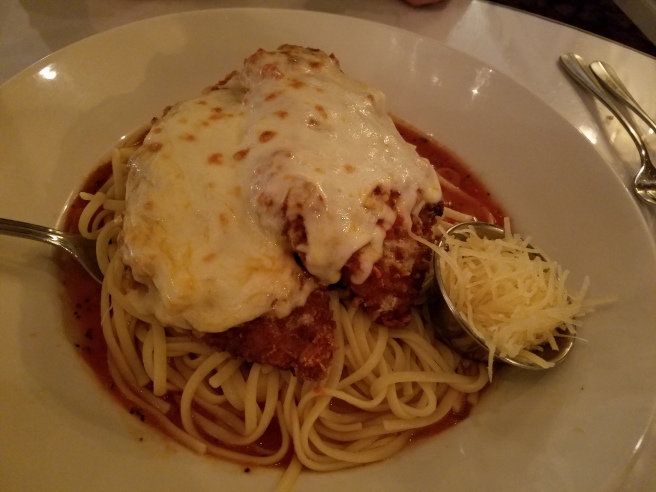 Before we ordered, my wife remarked “Chicken Parmesan, it’s a dish so simple, how could they screw it up?” The Wooden Nickel decided to take that challenge upon themselves and give a resounding answer how. Two enormous, flat-pounded chicken breasts cooked to beyond the grave, then chilled, baked again, and tasting of sawdust. The chicken portions were so overcooked, they couldn’t be cut without a knife and came apart in strings. The coating, much like the sauce, and cheese, tasted of absolutely nothing. The sauce here, even more watery than that featured in our appetizer, rejected the pound and a half of overcooked pasta and chicken completely, instead finding comfort at the bottom of the plate. The half pound of melted provolone on top of each piece of chicken provided the only flavor in the entire dish, choosing to make you sick to save you from having to complete it. The shining star, the shredded parmesan on the side, came included with the plate, as if the kitchen had already given up before serving the dish.

But what really makes me angry, and I definitely wasn’t angry before, were the “Vanilla Bean Shrimp”. Described as “Pittsburgh Restaurant Week’s PRABBY award winning”, the shrimp were overcooked and underseasoned, along with everything else on this dish. The whole plate was covered in a butter sauce created by someone that maybe had once enjoyed vanilla bean, light years from the “Tahitian vanilla bean butter” sauce I’d been promised. The potatoes were burnt on one side and raw on on the other, yet somehow completely flavorless and mushy. The asparagus, while not incredibly overcooked, were mushy with butter. The three (3!) shrimp were butterflied and stuffed with a jumbo lump crab meat, which was the only saving vestige of the entire dish. The shrimp were rubbery and tasteless and disappointing. My only explanation is that the dish voted “best of” the Pittsburgh Restaurant Week in 2014 is not this dish, that chef has long since quit and moved on to a better restaurant, and those left in his stead have had to make do with only random scribblings of recipe notes and the palate of an 8 year-old.

Finally, as a last note, I need to explain my extreme and utter disdain for this dish and the restaurant serving it. Their Appetizer section, affectionately referred to as “No Better Way to Start”, has a dish under it. The specific dish I’m referencing is described as “Three crab-stuffed jumbo shrimp, topped with Tahitian vanilla bean butter” is called Vanilla Bean Shrimp and is listed at $16, a price I’d have no problem paying for my entree. Quite to the contrary, my dish, with the addition of potatoes and asparagus, cost me $30. So either the potatoes and asparagus cost the restaurant $14 or I just paid $10 a shrimp (or $5 more per shrimp) for absolutely no reason at all. I am never one to complain about pricing, but this just infuriated me.

Naturally, my wife didn’t finish her meal, so she asked for a box out of consideration and kindness. We had no intention of eating the leftovers, but we were not about to get into it should questions be asked. Some restaurants it’s just better cutting your losses, spreading the word about quality, and never returning. The icing on the proverbial shit-cake came when they brought out her leftovers. Please keep in mind this is a restaurant that consistently churns out $75+ tickets on their tables. 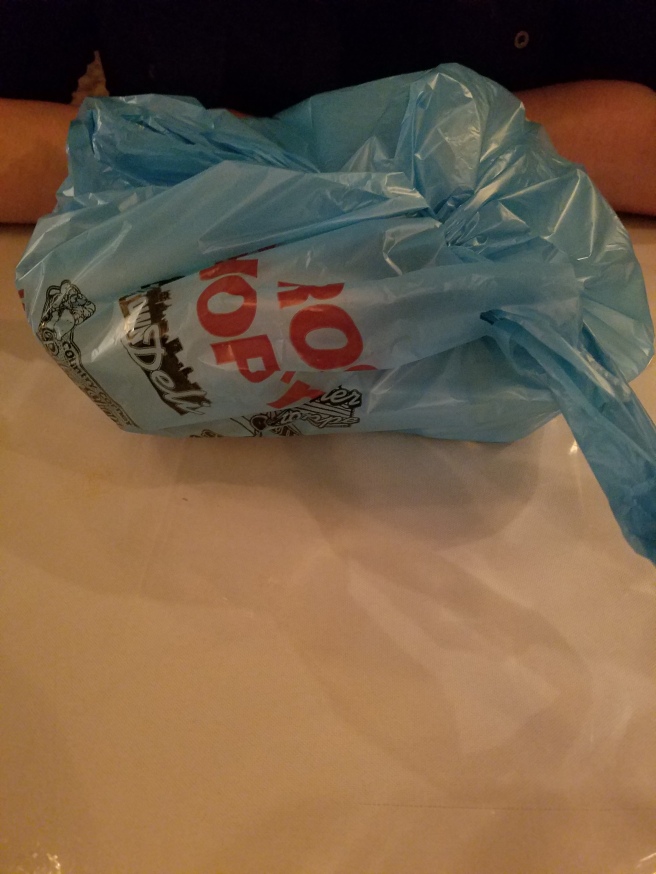 I can say no more beyond our experience. I’d love to hear from others. Have you been here? Did you have a good meal? Was the chef and entire kitchen staff murdered shortly after you left? Are there imposters in the kitchen now? Who can we warn? Please don’t take or eat at any Wooden Nickels.